Chimaera are the native inhabitants of Eretz, composed of a mixture of animal and human body parts. "Chimaera" is actually a blanket term that refers to a numerous amount of separate races and tribes that have been united for centuries under a single cause - the war against the seraphim.

The origins of both races, chimaera and seraphim, are not well known.

According to chimaera mythos, it all began in a time before time: where only the sun and the two moons of Eretz existed. The sun had been betrothed to Nitid, the older of the two sister moons. Still, it was her sister, Ellai, who stirred his lust. He came upon her bathing in the sea, and took her. She struggled, but there was no escape. Afterwards she was able to stab him and run, the blood of the sun flowing like sparks to earth. There, they became seraphim- "angels" of fire. After Ellai had ran, she found her sister and Nitid wept, her tears falling to the earth and becoming chimaera, children of regret.

The seraphim believe that it all originated from a time of only darkness and monsters vast as worlds who inhabited it. They were called Gibborim, and they hid their ugliness and killed any who would attempt to create light to shine upon their terribleness. A race of bright warriors had traveled from their bright world to slay the Gibborim and bring light. In the end, many were slain, but the victory belonged to the warriors. There were only a hundred left alive, but they became the godstars. They made the rest of the stars and other sources of beauitful light, including the children created in their image: the seraphim, those who they decided would protect all of the world they had worked so hard to create. One day though, Zamzumin, the last of the Gibborim, persuaded them that shadows were needed to brighten the light. So the godstars brought shadows into being. Zamzumin was a trickster, and used the shadows to create children of his own image: the chimaera, children of darkness who would forever fight the light filled seraphim.

For as long as the two races existed, the chimaera have been enslaved by the seraphim, until the rebellion of Astrae. It was lead by the Warlord and the Resurrectionist, who proceeded to wage the war and continue to fight for the freedom of chimaera.

It depends on the clan, but all chimaera can fit into at least one of these three main types: 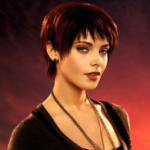