Once upon a time, an angel and a devil fell in love and dared to imagine a world free of bloodshed and war.

This is not that world.

Art student and monster's apprentice Karou finally has the answers she has always sought. She knows who she is--and what she is. But with this knowledge comes another truth she would give anything to undo: She loved the enemy and he betrayed her, and a world suffered for it.

In this stunning sequel to the highly acclaimed Daughter of Smoke & Bone, Karou must decide how far she'll go to avenge her people. Filled with heartbreak and beauty, secrets and impossible choices, Days of Blood & Starlight finds Karou and Akiva on opposing sides as an age-old war stirs back to life.

While Karou and her allies build a monstrous army in a land of dust and starlight, Akiva wages a different sort of battle: a battle for redemption. For hope.

But can any hope be salvaged from the ashes of their broken dream?

Once upon a time, an angel and a devil held a wishbone between them. And its snap split the world in two.

It is early May. Karou has left Earth for Eretz, where the chimaera lie defeated and broken by the seraphim. Her friend Zuzana Nováková, and Zuzana's boyfriend Mikolas Vavra, still remain in Prague. The supernatural events that occurred on the Charles Bridge have caught the attention of the media worldwide. Zuzana and Mik are chatting while a news reporter interviews Kazimir Andrasko about Karou, known to the world as "the Girl on the Bridge". In Uzbekistan, Akiva enters a portal that will take him back home, to Eretz. After making it to the other side, he relentlessly searches for Karou through a ravaged land. He eventually realizes that she must have fled to her childhood home - the Adelphas Mountains. In the mountains, Akiva examines the caves that once housed the members of the Kirin tribe. He finds one of the thuribles used by chimaera soldiers to store the souls of revenants lying on a table. Attached to the vessel is a slip of paper with one word written on it: Karou.

Leaving the Adelphas Mountains behind, Akiva heads to Cape Armasin, where he practices his fighting skills at a training theater. Unexpectedly, he is confronted by his two half-siblings, Hazael and Liraz. Meanwhile, Zuzana grows increasingly worried at her friend's absence, sending e-mails to her that end up unreplied. Akiva spends a month patrolling, training, practicing magic, interacting with his half-siblings - anything to keep his guilt and despair from overwhelming him. His routine is interrupted one day, when he and his father discover that someone has been killing seraphim.

Back on Earth, Mik turns his girlfriend's attention to the news on the television screen. Elsewhere, a seraph named Bethena arrives at a small chimaera village with seven other seraphim. They have been sent by Emperor Joram to exterminate the villagers, as part of Joram's plan to wipe out the remaining chimaera settlements left in Eretz. The chimaera, however, knew that the seraphim were coming and went into hiding under the aqueduct. The seraphim become aware of this as they follow the chimaera's tracks. But the villagers aren't the only things under the aqueduct, as the eight seraphim have the misfortune to find out...

The news that catches Zuzana's and Mik's attention is revealed to be about a phantom girl who has been stealing teeth from the wildlife dioramas of museums around the world. Karou finally replies to Zuzana, assuring her friend that she is still alive though her whereabouts are cryptically written.

In her workshop, Karou has a brief dream about Akiva. She wakes up, startled, and continues stringing together some teeth, bones, and iron filings reserved for the body of a soldier named Amzallag. As it turns out, Karou has taken up Brimstone's former role as "resurrectionist" of the chimaera. While she has the ability to magically create new bodies out of animal teeth and minerals, she still has a lot to learn before reaching Brimstone's level. This is demonstrated when she accidentally misplaces one of the teeth for Amzallag's body.

Once upon a time, the sky knew the weight of angel armies on the move, and the wind blew infernal with the fire of their wings.

Once upon a time, a girl lived in a sandcastle, making monsters to send through a hole in the sky.

Once upon a time, chimaera descended by the thousands into a cathedral beneath the earth. And never left.

Days of Blood & Starlight was listed as one of Amazon.com's Best Books of the Month for November 2012.[1] Amazon's accompanying review called it "an epic sequel"[2] that was "just as good, if not better" than Daughter of Smoke & Bone. The Daily Mail also wrote a positive review, noting that while the plot could be "a tad complicated in places", the novel "flies on blood-tipped wings and grips like a magical vice".[3] Publisher's Weekly gave the book a starred review and praised Laini Taylor's "dazzling writing and skill at creating suspense".[4] 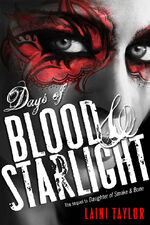 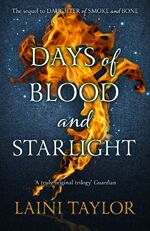 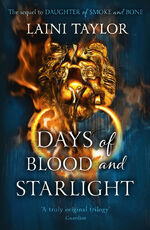 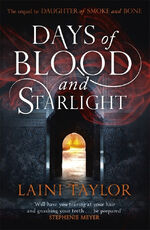 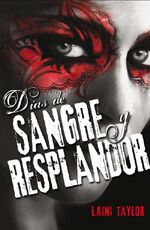 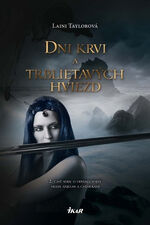 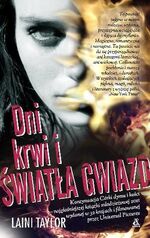 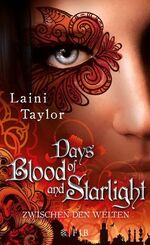 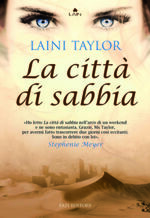 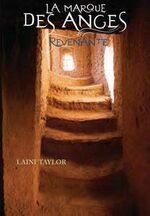 Retrieved from "https://lainitaylor.fandom.com/wiki/Days_of_Blood_%26_Starlight?oldid=7330"
Community content is available under CC-BY-SA unless otherwise noted.