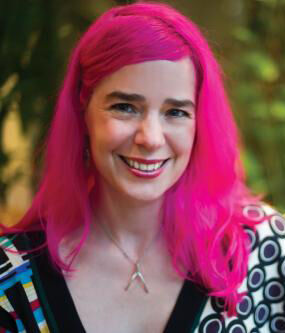 Last night, we got to attend one of Laini Taylor's book signings during her tour and she was kind enough to give us a few minutes for an interview! We tried to ask as many of your questions as we could, but time went by very quickly! For all the fans out there, Laini is seeing what you're doing! Whether it's Daughter of Smoke & Bone fanart, Razgutsby, or Lady Thiagaga, Laini is seeing it and enjoying it, so keep it up!

Along with answering a few of our questions, she was sweet enough to do some signing, so stay tuned for future giveaways! Keep reading to see what Laini had to say about her hair, the writing process for DOSAB, and an update on the movie! Pictures from our interview and her visit to the bookstore are at the bottom!

Q: So, on the topic of your hair, someone asked why do you have pink hair? And we were curious too!

A: Yea, you know, I don’t really have a great answer for this but I’ve had it for 7 years and I got it right when my first book was coming out in 2007. I was going to Comic Con and, I don’t know, it was something that I had some point in the previous year thought of that would have been fun, but of course I would never do that, of course! But then something like that gets in your mind, and then as time passes, of course, I was like “Why wouldn’t I? Wait…maybe I will,” and then before you know it...yea, it just seemed like a good thing to do! It makes me really easy to find, but, that first week I had it done, I was at a CWI conference and I was in a kind of boring seminar, and it occurred to me right away...I can’t sneak out!

Q: Did that influence the blue hair?

A: I guess! You know, the whole creation of Karou was so spontaneous and organic that I don’t know where she came from, but I’m sure that probably that wish fulfillment to not have to go to the salon and to have that hair grow out of your head that color [was a part of it].

Q: Another user asks “I’ve read somewhere that Daughter of Smoke and Bone could also have been named The Wishbone. If you had gone in this direction, what would you have named the other two books?”

A: I don’t know what I would have named the other books, but my working title was “Wishbone.” When I started writing it, it was just this day of giving myself a play date to write for fun because the book I was trying to write was just not working out and I was hating writing! Karou and Brimstone just appeared and there were these things that happened, aside from their dynamics which were just fun from the start, and it just all started from these few little questions in the context of this scene and he’s wearing a wishbone around his neck. I actually have the notebook page from my writing notebook at the time and inside the front cover I had a list of words that I liked. It was like "eclipse" and "wishbone" and so obviously my unconscious just put that out on his neck! But the thing was, she wasn’t allowed to touch it and I didn’t know why.

So the questions kind of sprang the whole plot, and, so to me, it was always just super meaningful—the wishbone, but it wouldn’t have been a tenable title because of that TV show—the one with the dog? Apparently on Amazon, you search “Wishbone” and there was this 800-episode TV show! So, not good search engine optimization! So the publisher came up with the title while I was still writing the book. I was a little bit uncertain about it at first but then it grew on me, and now I love it and then I came up with the other two! The second book actually could have been called Revenant but I didn’t really know what the second book was going to be about when I was writing the first one, but, you know, that happens a lot in publishing.

Q: So how much of the series did you plan out when you were originally writing the first book?

A: Actually, there was a time when writing that I knew the Romeo and Juliet element, and I knew there was this other story with Madrigal. There was a part of me that thought that story should be its own book and maybe that would be the middle part of a trilogy that you get to after the ending of the first book. I thought that would be a terrible idea though, to have a second book that was essentially different characters, and it was kind of unorthodox to have the third book be this whole flashback but it kind of had to be. So, I knew how the first book would end and I knew the note upon which it would end. Actually, in my first draft, I didn’t have an epilogue. It just ended with ‘And they’re all dead’ and my editor was like “Maybe you should have an epilogue...” And I’m so glad!

I did have a sense of the larger story after that, but I had a very loose sense when I first sat down and began to start writing Days of Blood and Starlight. I had so little idea of what I had bitten off, and I tried to start writing Days in the fun tones of Daughter and it just was clearly not working. I really kind of wanted to skip over all that war stuff and get back to the kissing, and as I kept trying to do that I realized the logic of the situation and had to let it be what it needed to be, which was a war book! I realized ridiculously late how I had set out to write a war book. Then the challenge became how do I write a war book that I can enjoy writing about that people will enjoy reading and that is dark, but it never gets so dark that you never want to open it up again? There were some cautionary tales at the time, some books that I had been reading at the time that got so dark that I didn’t want to open them again.

Q: Was Night of Cake and Puppets a nice break then?

A: It was! Oh my god, after that I was like “How do I write a book where the world is not in danger?” It was really fun, and also to create in an established world where you don’t have to introduce everything was total cake. I don’t know where Zuzana comes from. She’s like my very buried, more confident alter ego or something.

Q: One of your #1 fans would like to know if there’s any news about the Daughter of Smoke and Bone movie that you can share with us!

Q: Is it exciting for you to see that process?

A: There are periods where it’s been freaky, but it’ll be fun to see how it works! Everyone is so great and down to earth. The process is crazy, of course, and there are so many people and it takes so long, but everyone is super committed and creative and I can’t wait to see the visual creation of the next stage!

And this is the part where the interview slowly devolved into us discussing our favorite fancasting choices with Laini! We can't reveal anything, but she has definitely been keeping up to date with who fans would love to see in the movie! Now, check out some of the pictures from our short visit! 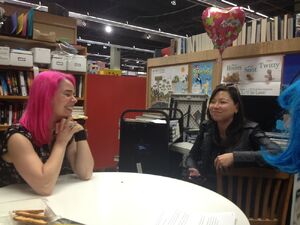 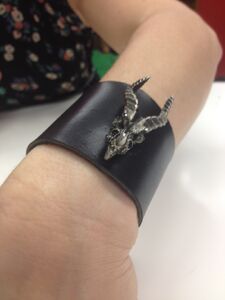 How amazing is this bracelet?? 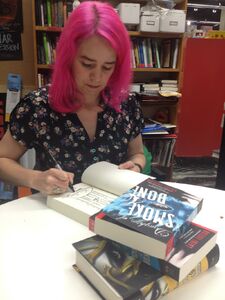 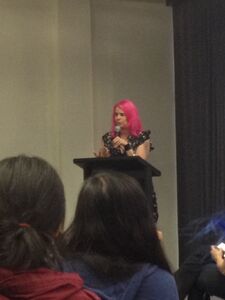 Talking to the fans 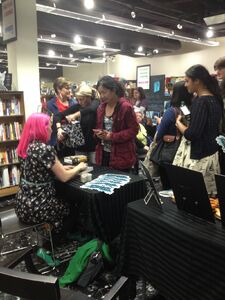 Check out that line! 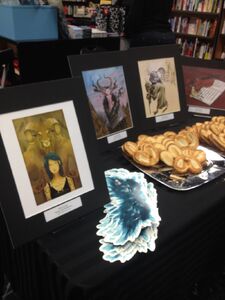 Love the art she brought on tour! 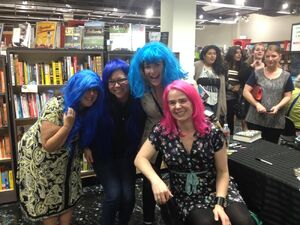 Laini with Wikia fans and the lovely book store manager!

A HUGE thanks again to Laini and her publicist for giving us the chance to have this short interview! Remember to support her by getting Dreams of Gods & Monsters, which is out now!